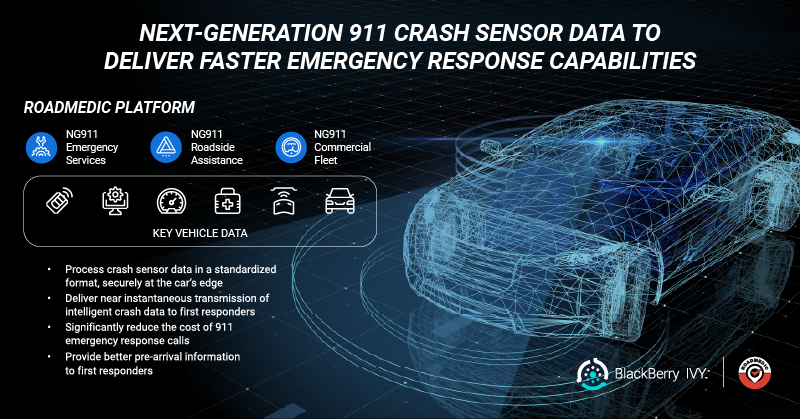 “RTC eliminates the cost, complexity, and compliance inefficiencies that automakers would otherwise need to solve to seamlessly integrate and interface intelligent crash sensor data with NG911 public safety and first responders during roadside emergencies,” said Lawrence E. Williams, CEO and founder of RTC. “Collaborating with BlackBerry helps us with speed to market as part of an embedded platform already being delivered to multiple global OEMs and will help to further our mission to provide better pre-arrival information to first responders about the severity of a crash and the likelihood of severe injuries, which can make all the difference when every second counts”.

“We look forward to collaborating with RTC to help improve roadway safety amidst record numbers of traffic fatalities,” said Peter Virk, VP, BlackBerry IVY Product & Ecosystem. “With software increasingly being recognized as the driving force of automotive industry innovation, delivering compelling solutions that are seamlessly integrated into a vehicle’s operating system such as this allows OEMs to set themselves apart from one another.”

As part of the collaboration, BlackBerry IVY will further secure end-to-end data integrity between crash sensors in the vehicle and NG911 public safety while RoadMedic will reduce network overhead and latency localizing crash data processing to the car.

For over two decades, RTC has been working with multiple diverse non-compatible ecosystem partners to create an efficient common language and vehicular emergency data platform to enable them to “talk” to each other. Ecosystem partners include automakers, 9-1-1 public safety operators, as well as policy and regulatory stakeholders. During a pilot program with Ford Motor Company and the Greater Harris County, TX 9-1-1 Emergency Network, RoadMedic demonstrated its effectiveness when a Deputy Sheriff’s life was saved after a severe crash because his Ford police car was equipped with the technology.